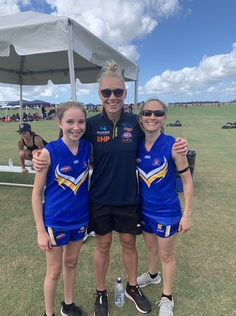 By Kate Carey and Samantha Carey

A smattering of clouds and a light breeze kept the Florida heat at bay for day one of the two day USAFL National Championships. Nearly a thousand players from 44 teams travelled from all over the USA and Canada to descend on the Premier Sports Campus in Lakewood Ranch, Florida, for the 2019 USAFL National Championships. The Washington DC area was represented by the DC Eagles men’s team in Division IV while a large contingent of DC Eagles Women were supported by players from Des Moines and the Arizona Outlaws in the Women’s Division II. DC Eagles men’s team started out strong with two convincing wins on day one of the competition. The Eagles attacked the ball with intensity to keep Minnesota Freeze scoreless for a 57-point win followed by another strong win over the Atlanta Kookaburras. The Eagles Women (4.4.28) outclassed the Montreal Angles (1.0.6) in game one and kept Houston Lonestars scoreless in game two, comfortably wrapping up top spot in Pool A. Off the field, the players enjoyed Four and Twenty Pies and mingling with USAFL guests of honour AFL/AFLW players Mason Cox (Collingwood Maggpies) and 2019 Best and Fairest Erin Phillips (Adelaide Crows) (Pictured left). 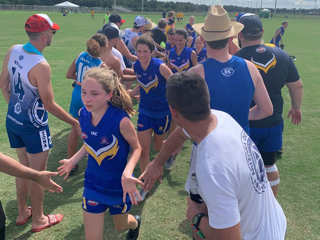 With confidence high coming into day two of the competition undefeated, the men’s side suffered a heart-breaking 1-point loss to the Des Moines Roosters. While the DC Eagles Women faced the Sacramento Suns in the early morning semi-final. In an intensely physical game with the ball slick with morning dew, marks were hard to come by. The tight-knit Eagles, with eyes focused on a Grand Final berth, rallied for a hard fought 1.3.9 to 0 win. The Division II women’s final saw the top seeds from Pool A and B face off under the blazing Florida sun. Both sides played intensely with the DC Eagles combination holding the lead for 38.5 minutes in the bruising final. For the Eagles however, the fairy tale ending wasn’t to be with Philadelphia/Arizona/Baltimore/Boston kicking a goal in the dying seconds to steal a 13-8 victory. Despite the emotional losses, it was an unforgettable weekend of footy, with both teams hoping to building on the successes of 2019 as we look towards the 2020 season.